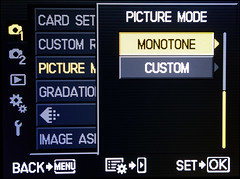 So. Let’s get started. The simplest way to get into B&W is to set your digital camera’s shooting mode to BW, Monochrome, Monotone, or whatever it may be called on your particular camera model. The above menu is from a Olympus E-PL2 and after it’s set my images are all greyscale rather than colour. You can take these images into a photo editor, play with the brightness and contrast sliders, and usually get a decent B&W image. This works, and a friend of mine who uses this mode quite frequently for his street shots does good work shooting this way.

If you’re new to B&W shooting, I recommend playing around with this mode and shooting some pictures with the in-camera B&W setting. One thing it does is teach you what the monochrome world looks like because you can see colour translated to monochrome on your LCD viewer. This is a good stepping stone for more sophisticated B&W shooting because you begin to develop a sense of tonality–a key feature in B&W photography.

If it’s this easy, why doesn’t everyone simply do it this way? Although it is the simplest way to do B&W, it’s not the optimal way. I prefer shooting in colour then converting to B&W in a photo editor for the reason that you carry more potential image information in a colour shot than in one where the camera’s computer has already decided what tones to present in monochrome and has cast aside other possibilities. When I’m creating a B&W photo, I want to make decisions based on all the information available. To see all the B&W tonal possibilities that exist in an image, you need a colour RGB (Red-Green-Blue) image.

To better understand B&W, let’s start with colour and the way it gets recorded on your digital camera’s sensor. The sensor is a flat chip and on it reside millions of photosensitive sites (megapixels) that respond to the Red, Green, or Blue of the light spectrum. Recalling your knowledge of Art 101, you know that red, green, and blue are the primary colours from which you can mix the entire colour spectrum. 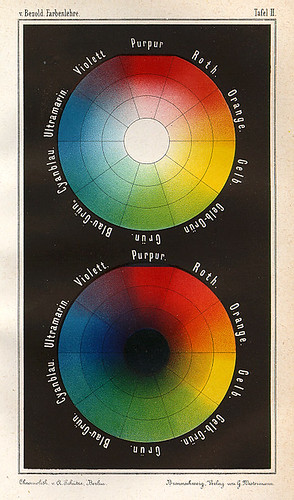 The sensor site, or pixel, doesn’t actually capture the colour; it records a 1 or a 0 to indicate which colour it “sees” and then the camera’s image processing engine (call it the computer in your camera) either translates the digital information into an RGB colour image in the form of a Jpeg or packages the unprocessed information into a file called a Raw file, and records it on your SD or CF card. Raw files have extension names such as .NEF, .CR2, .ORF, .ARW, etc., depending on which brand of camera you are using.

We’ll talk about Raw files later in the series, but for now, let’s stick with Jpeg. For the reasons above, a Jpeg image is also called an RGB image and in Photoshop you can actually load the Red, Green, and Blue channels of the image separately. Let’s start with the following image which was taken with a smartphone camera in front of my local grocery store: 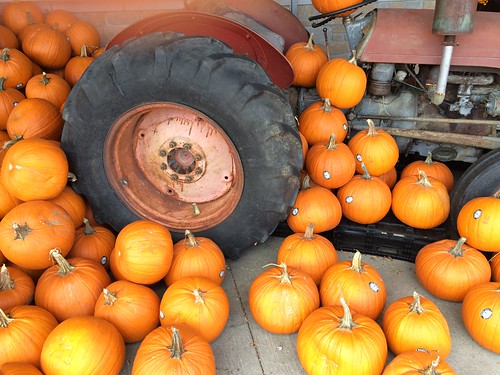 In Photoshop we can examine the individual channels by clicking Channels in the Layer palette in the upper right-hand corner: 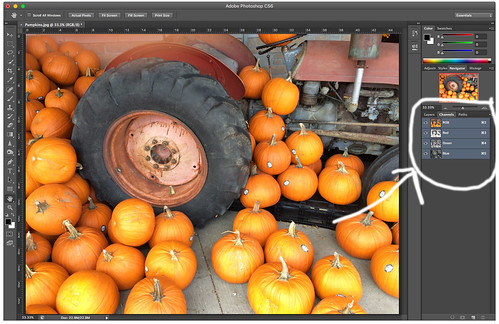 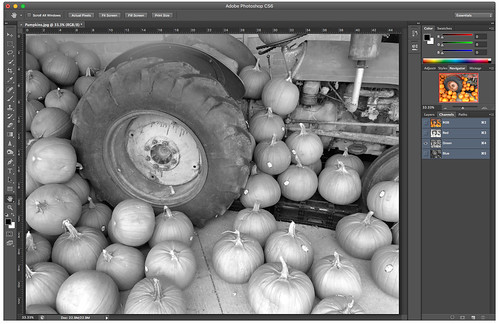 RGB Red When I click off the Green channel and click on the Red channel, we see a different world of tonality altogether. What a difference! 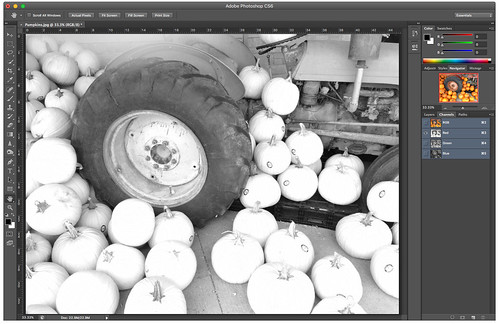 The red channel has subtracted tonal value from the orange/red pumpkins and made them ghostlike. It’s always worth a look at the Red channel, even though there’s not much to work with in this case. The Red channel tends to be a little noiser (grainier) than the Green channel, but it’s pretty useable, all in all.

RGB Blue is the bad boy of the channels. It tends to be the noisiest channel (though not bad at all on recent camera sensors) and is generally avoided as the sole basis for a B&W image unless it has some special merit. Let’s look at  it. 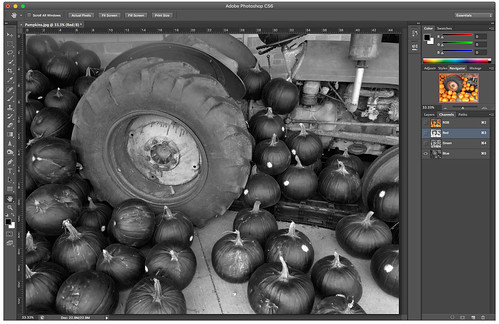 Whoa! Look at that! The Blue channel intensifies the red/orange of the pumpkins and gives them a dark tonality. What I see here grabs me and makes me want to have at least some of that brooding blue channel in my image. The next question: is there a way to mix them so you can use as much of each channel as you’d like? Of course. The answer is a tool called the Channel Mixer (a tool also available in Gimp): 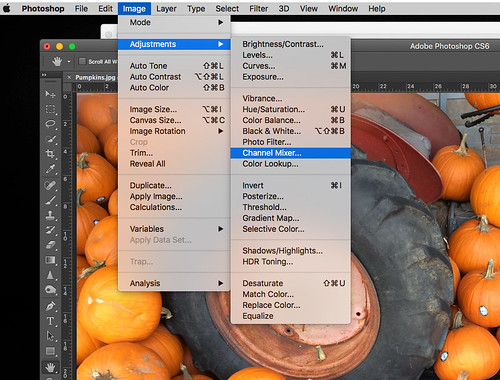 Once I click on the “Monochrome” checkbox, notice that the default starting point in Photoshop is 40% Red, 40% Green, and 20% Blue, a generally good balance. 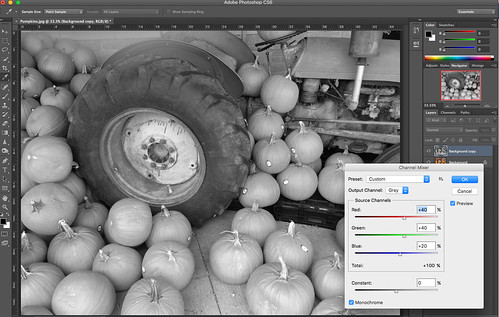 We already know from looking at the channels that the Red channel isn’t much use to us, and that the Blue channel has the interesting tonality. I’m going to remix the channels to 0% Red, 30% Green, and 70% Blue (it’s best if the values equal 100%), so that it looks like this: 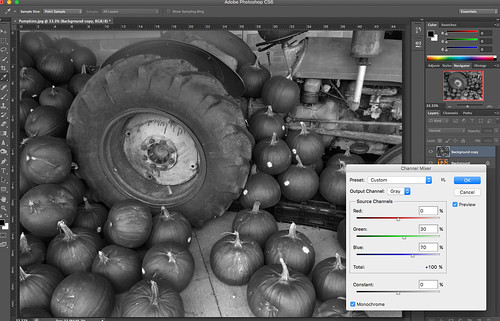 If you’re an experienced B&W film photographer you’re probably saying to yourself, this sounds like coloured filters to me. You’re quite right. If you know how to use yellow, orange, red, green, and blue filters for B&W film, you’ll find these trusty old friends hidden behind the Custom tab. 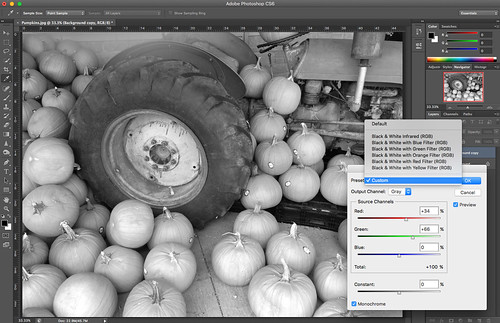 Note: there is a strong element of play involved here. There are no right or wrong answers in B&W photography and B&W is much more pliant than colour. My interpretation of a B&W photo will almost certainly not be yours. B&W is, by it’s very nature, an abstraction of what you see in colour. Whether you go for a dark, brooding look, or an unusual white-pumpkin look, try out the options and have some fun playing with tonal values. The more you do of this, the more you’ll begin to sense what you like best in terms of B&W tonality. As I said, I like the dark tone of the pumpkins in the blue channel and here’s what my personal final image looks like: 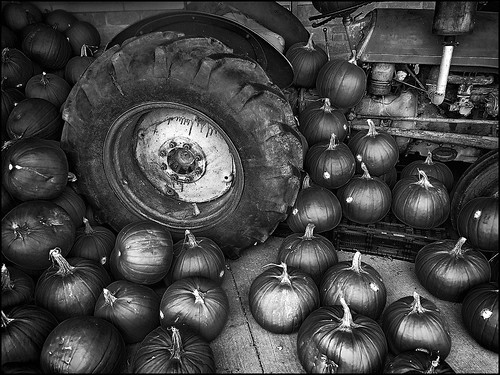 Notice I went for a dark look with silvery highlights. The final image has also had a subtle bit of vignetting applied and has been sharpened, all things we’ll cover in subsequent parts of the tutorial.

Next up: Pt. 3 will be where the fun really begins as we delve into how to use Layers, how to use Levels and Curves, and how to Burn and Dodge (darkroom terms of making selected areas of an image darker or brighter).

Until then, check out B&W images on your favourite photo sites (e.g. Flickr) and begin to study them to see what types of image tonality you respond to. And just try stuff out. If it turns out badly, put it in the trashbin and try something else. B&W photography is a voyage of discovery.

Gene Wilburn is a writer ~ photographer ~ humanist
View all posts by Gene Wilburn →
This entry was posted in Photography, Photoshop Tutorial. Bookmark the permalink.